If you want a fast paced romp through most of Manhattan and a game that respects your time by not flooding it with too many tedious side quests but enough to fill the time, Spider-Man: Miles Morales is the game for you. You don’t need to upgrade basic combos, but the game is more technical with the new “venom power” system provided for Miles. If you really want to get the most out of this and his new gadgets, doing the bonus objectives whenever you can brings an extra layer of fun and the spectacle of it all makes every electrifying hit count. The set pieces were well thought out and aside from the enemy bases and the construction buildings — that are still incomplete from the first game — had well laid designs and great use of the environment. Miles Morales still has that break between certain chapters where you can’t move on to the next story mission and it forces you to take a breath and soak in all the deep story you just experienced. However, it’s still a moment well taken out of your day. 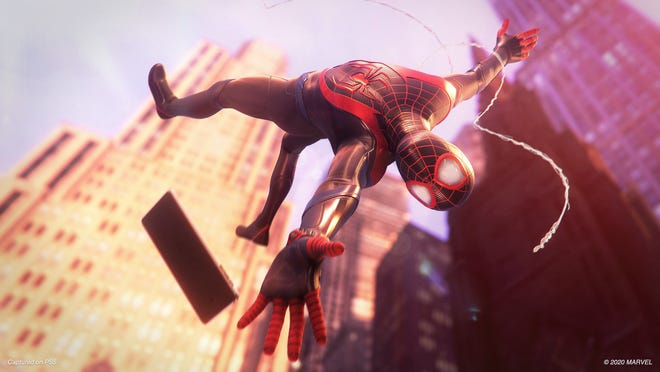 On the cutting room floor…

Spider-Man: Miles Morales is fairly short and I was able to clear it in 15 to 20 hours with 100%. This would have also been easier if I chose to play on “Amazing” rather than the “Spectacular” difficulty, but when it comes to Spider-Man, I like the extra challenge so I can only imagine how fast you can beat it if you bulldoze through it without doing side quests. I was able to comfortably get a platinum trophy in 2018’s Spider-Man and found it about the same for this one. It’s not required that you play the original but I highly recommend it as it fully adds to the world building and it significantly helps with the references that are made along the way.

Set one year after the original game, Spider-Man (Peter Parker) goes on vacation leaving Miles to watch over the city. You deal with the new Roxxon and “The Underground” organizations — much like the Silver Saber International and the “Inner Demons” from the first game — while struggling to find that balance between casual life and superhero. Among the turmoil that being Spider-Man can bring, you get a very close look at how the family matters and heart wrenching story unfolds. Sounds familiar.

The PS5 brought with it a new Peter Parker model that briefly left me perplexed. Maybe it was just me, but I didn’t really need an Andrew Garfield reminder.

The worst part of the “The Amazing Spider-Man 2” was Jamie Foxx’s role and it kinda soured the whole thing. Though it was an inevitable change, the 2018 model was still fresh in my mind.

The Hopes of Glory

One aspect that was a little underwhelming was having to choose between “performance” (60fps at the cost of quality) or “fidelity” (vice versa). I honestly wanted to see this game in all its glory through the best of both worlds of having the 60fps showing off the ray tracing and visual effects at 4K. At least the PS5 load time improvement was no joke and one of the main selling points I think all of us were waiting for. Overall, the visuals did not disappoint.

A Multicultural Melting Pot of Awesome!

Last, but not least, the Miles Morales soundtrack is a masterpiece every step of the way in comparison with the Black Panther soundtrack – it sounds like it jumps right off the record. I found myself wanting to swing all about the burrough just to nod my head to the perfect ambience it created. From the mixed race hero to Chinatown to the BLM mural plastered across the wall in the middle of Harlem, the entire game was respectfully inclusive. They even threw in an ASL (American Sign Language) character along with a beautiful nod to the late Chadwick Boseman and Stan Lee for good measure with the Uptown Pride suit and the monument of the creator.