Console exclusives — especially those that release among launch window slim pickings — are meant to impress and usher in the next generation of titles for a particular platform. The Medium doesn’t necessarily do all that. It, at least, looks the part and it’s apparent that the Xbox One would’ve had a hard time running its dual-screen presentation smoothly. You’ll need an Xbox Series S/X or a decent PC to run it but otherwise, it’s a nicely-wrapped horror game reminiscent of games we were playing back during the PS2 era. That’s evident in how the puzzles are rough, auto-saves somewhat broken (on PC) and sometimes infrequent. I learned, the hard way, that even if you’ve reached the solution to a particular bottleneck…you’re stuck there until you trigger the next scenario in the exact way Bloober Team intended you to advance. The Medium is not the first big XSX exclusive we may have been expecting, but it does weave an interesting enough tale — with gameplay taking a backseat mostly — containing plenty of jump scares, an eerie atmosphere, creepy voice-overs and the strongest Xbox controller rumbles this side of the Mississippi. It further justifies paying for that Game Pass subscription — even if it’s not convincing enough for its own separate, standalone purchase.

On the Cutting Room Floor…

Niwa Resort and the Maw

The Medium revolves around Marianne’s “special powers” in being able to travel in and out of the world of the living and the dead. You traverse a haunted resort set in the middle of a beautiful forest while avoiding other-worldly entities. It’s heavy on the story and light on the action mechanics as simple puzzles make up most of the gameplay loop.

On the narrative front, it mostly delivers…even if it does turn out to be somewhat predictable by game’s end. Otherwise, it mostly resembles a graphic adventure game where “insights” guide you to “echoes” and extra story bits that make up for a rather straightforward 8-10 hour tale. 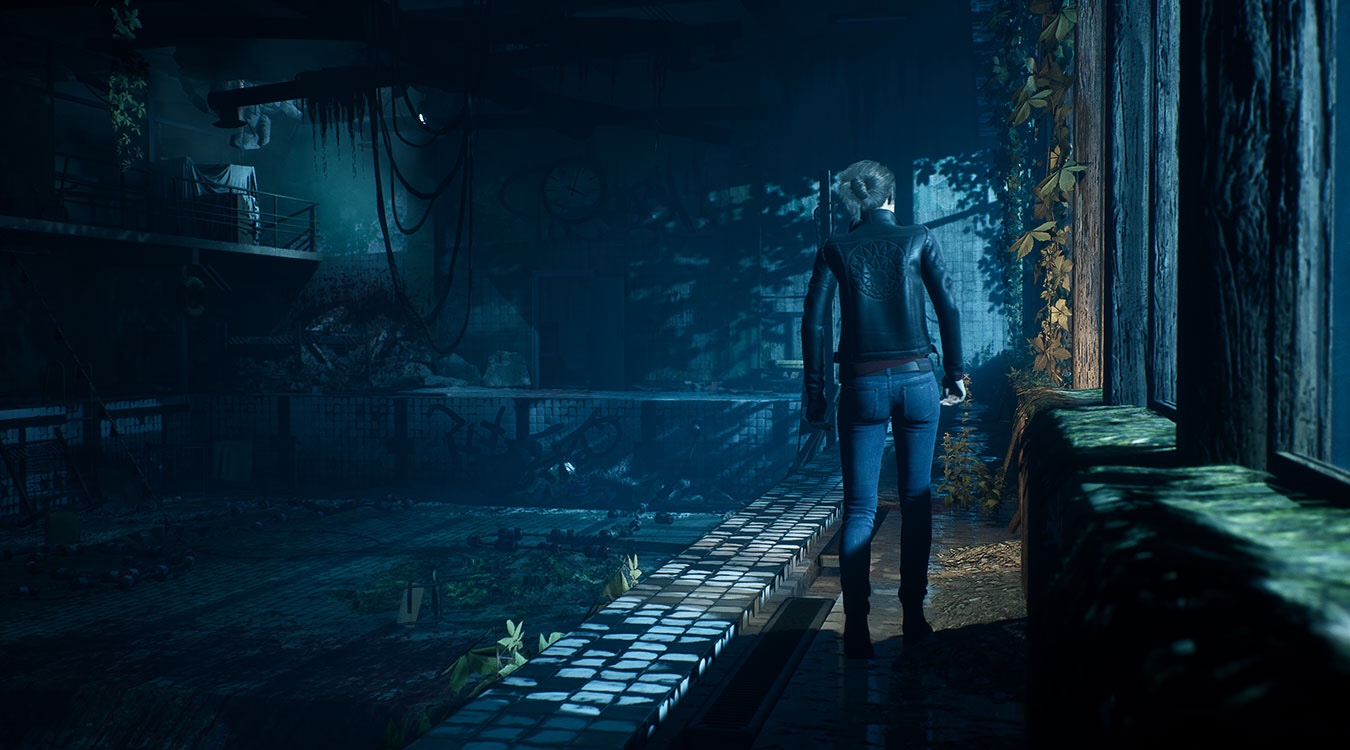 At first blush, the fixed camera angles used in The Medium make it seem like it’s made up of pre-rendered backgrounds but they’re not. You can’t really interact or “bump into them,” but there are some magnificent backgrounds being produced that sure look like what they were trying to get away with back during the PlayStation 1-era Resident Evils.

The fixed camera makes sense as an artistic choice considering that the game probably had a sensible, AA production budget. And it works for the most part, but does detract from the experience and makes the gameplay that comes from that choice feel somewhat limiting at times.

If it’s not the creepy voice-overs from the likes of a heavily voice-modified Troy Baker and the genuine dread that permeates throughout your aventure that will stay with you after playing The Medium, it will definitely be the Xbox controller rumble.

No joke, The Medium’s rumble “feature” would make Rez’s Tetsuya Mizuguchi blush. Bloober Team was not messing around when it comes to the the controller trying to give you some early-onset arthritis. I didn’t turn it down, beacause…well, it was kind of cool that the dev team had the sheer audacity to try to make the rumble high enough to cause you literal, physical discomfort.

The only thing they could’ve done better is probably synced it to, say, match the bass of the game’s soundtrack. Instead, it’s not good or bad…just expect the controller to want to jump out of your hand at random, opportune moments.